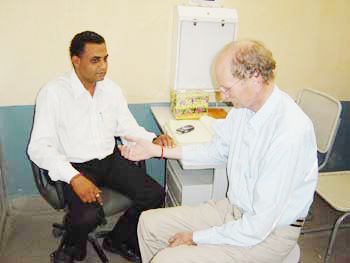 Globally increasing awareness about treatment without chemicals and interest for organic diet are two basic reasons for popularization of Ayurveda. It is important to make it clear that vision of looking on ayurveda as a system of treatment or a pathy is very poor and insufficient, more appropriately it is a complete philosophy or way of living for complete lifestyle management. Basic materials of ayurveda like salt, sweet, wheat, rice, turmeric, ginger, peeper, coriander are integral part of our life from birth to death but not the chemicals in the tablets or capsules.

Ancient seers of ayurveda had described the Panchkarma as the important most part of Ayurvedic medicine, Vedic astrology and Yoga are the sister branches of Ayurveda and it is difficult to impart a complete cure at the level of somatic and physical level without complementing the ayurveda with Vedic Astrology (Jyotish) & Yoga.

Experience
Dr. Sanjeev Sood had done his post graduation in Ayurvedic Medicine (Kaya Chikitsa) with special reference to Panchkarma & after the same teaching and practicing Ayurvedic Medicine since 15 years at India’s oldest Ayurvedic Institute Dayanand Ayurvedic College, Jalandhar. He is visiting faculty of Ayurveda to EISRA- Holland, ICAU – Belgium, Medicarom – Romania and other institutes of Ayurveda in many countries.

Vedic Astrology
Dr. Sood is working as President of Amateurs Jyotish Association since 1985. He trained two batches with Vedic Astrology in Holland and one batch of professional Astrologers in Romania.

Yoga
Dr. Sanjeev Sood got the opportunity to learn yoga one to one from the best Yoga Master of India Shri Sudarshan Biala author of “Yoga for Better Living and Self Realization” and now co-authoring the forthcoming eBook on Yoga with his Master.

Recognized as one of the leading Teacher & Practitioner of Ayurveda, Panchkarma, Vedic Astrology & Yoga in India and abroad.